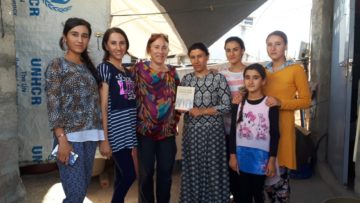 The widow and daughters of the Ezidi Progress Party leader, Waad Hamad Mato (DoB 1967), arrived in Paris December 20, 2018, after four years of being rejected for asylum by other countries.  They were on the first plane of 20 Yezidi families promised asylum by French President Macron in response to the request from Nadia Murad, Nobel Peace Prize winner.  Macron promised to bring 100 Ezidi families.

There are still 300,000 Ezidis displaced in Kurdistan, northern Iraq, searching for a way to leave Iraq for a safe country.  Canada and Australia are the only countries offering asylum programs for Yezidis, but they are only accepting survivors of ISIS captivity and rape.   Germany accepted 1,100 survivors in 2016. Waad Hamad’s wife and daughters were not captured when ISIS attacked Shingal August 3, 2014, so they did not qualify for any asylum programs for survivors.

On August 3, 2014, Waad was in Sinjar city with the family car, while his family was at home in Tal Banat.  With only three bottles of water, Hamdiyah and her girls fled to the base of Shingal Mountain in a neighbor’s pickup truck carrying 27 people.  They walked onto the mountain.

Prior to 2014, Hamdiyah’s husband, Waad Hamad Mato, was held prisoner for two years in Kurdistan for his activities to organize a Yezidi political party.  When ISIS attacked Sinjar city, in August 2014, they lowered the party flag on Waad’s party headquarters and raised the black flag of ISIS.  Waad was captured and not heard from after August 7, 2014.

Hamdiyah recalled, “Really and truly, we thought we were going to die. We ran with only three bottles of water.  If we stayed on the mountain we would starve.  If we returned to our village, we would be killed by ISIS.  Our only choice was to keep walking west toward Syria on top of the rocky mountain,one step at a time.  I was thinking of what would happen to my five children if I did not survive, so I kept putting one foot in front of another.  I gave what food there was to my children.  I barely ate enough to keep myself alive. “

“We were all crying along the way, because the children were starting to die.  My youngest girl, Gulizar, who was not yet six, became so dehydrated that I thought she would die, so I told the others to go ahead without me.  I would stay with my child until she died, but no one left us. After four hours, Gulizar woke up. Everyone took turns carrying Gulizar all the way to the Syrian border.  Along the way, we saw children who had died.”

When I met Hamdiyah and her daughters in 2015, they were living in a tent in Khanke camp.  They shared a toilet with four other families.  For the first year they had to carry water in buckets from a great distance.

I recorded their names along with aunts and cousins and the missing fathers and husbands.  With donations, my charity AAJ got Iraqi passports for the extended family.

In 2015, the family built a concrete slab floor and a one-meter high concrete wall inside the canvas tent walls to keep the rain water out. By 2018, they had built the four walls two meters high, inside the canvas tent walls.  All other IDP camps forbid the building of concrete walls.  They could fill their water tank when the camp turned on the piped water on a weekly basis.  For four-and-a-half years they lived in this tent and washed their beautiful long hair in buckets of cold water.

Gulbahar, the eldest, is speaking good English, so in 2018, I took Ayham, who had returned from captivity with ISIS speaking only English at age seven, to visit the girls.  They compared stories of escaping from Tal Banat to the mountain. Unfortunately, Ayham was captured along with his brother and mother.  His mother is missing.

I strongly recommended Hamdiyah’s family to UNHCR for resettlement.  In July 2017, the UNHCR team in Duhok interviewed her and her daughters.  Canada had promised to accept 1,200 traumatized internally displaced persons (IDPs). When Gulbahar, the eldest, got the call saying they had not been chosen for either Canada or Australia, she called me. She could hardly speak through her sobbing.  Since the girls had not been abducted and raped, they were not considered to be a traumatized, vulnerable family.  There was no country with an asylum program for more than 300,000 traumatized Ezidis who had not been raped.

By the end of 2017, facing a fourth winter in a tent, and with no hope on the horizon, Gulbahar told me she cried every day and night and wondered why she was alive.  The situation for Yezidis was growing more desperate. Depression was pervasive in the camps and suicide was becoming a real worry.  I continued to petition without success for a country to grant asylum to Hamdiyah’s family.

When French President Macron promised Nobel Peace Prizewinner Nadia Murad that France would accept 100 Yezidi families, I worked with Ezidi activist Farhad Shamo Rasho in Paris to put Hamdiyah’s family on the list that Nadia Murad compiled.  On December 20, 2018, Hamdiyah and four of her daughters arrived in France.  Her sister’s family was given asylum previously in Canada, dividing their families. Their husbands are missing, presumed dead.   One daughter stayed in Iraq because she recently got engaged to be married.

There are 300,000 other Yezidis, most of whom were not captured by ISIS, who are living in dire conditions and need to leave Iraq.

It is not safe to return to Shingal where the villages on the south side of Shingal Mountain are full of bombs which will take at least three years to remove.  The infrastructure is destroyed.  Many houses were exploded by ISIS or burned on the inside. All houses have been stripped of all furnishings, appliances, doors,windows, electrical wiring, fixtures, and plumbing.  The villages have no electricity and no clean drinking water.  The villages on the south side are empty except for security guard posts.  The roads in those villages are deteriorating and turned to weeds.

Yezidis say they cannot return to Shingal without a Yezidi self-defense force and international protection of Shingal borders and airspace.  Yezidis have lost trust in both the Kurdish Peshmerga of Kurdistan and the Iraqi Army to defend them since both of those forces abandoned them in 2014 to the genocide from ISIS.  Until international protection is provided, Yezidis cannot safely return to Shingal regardless of reconstruction projects.

Although ISIS is declared defeated in Iraq, the ideology of jihad against non-Muslims remains. Yezidis’ only viable solution is mass migration for all who wish to leave.  France’s gesture to accept 100 families is just a beginning.

Using France’s “asylum visa,” any resident of France can privately sponsor a Yezidi family. The private sponsor pledges to provide housing and orientation for the asylum-seekers.  The French government provides food support and social services. More private sponsors are urgently needed for  all Yezidis in Iraq who wish to leave, not only rape victims.   Instructions for religious minorities in Iraq to apply for an asylum visa can be found on the website for the French Consulate in Erbil.

Dr. Amy L. Beam is the author of “The Last Yezidi Genocide.”  She has gotten more than 700 Iraqi passports for Yezidis, mostly survivors.  Most of them have gotten asylum in Germany, Canada, Australia, and the United States. She continues to advocate for asylum for all Yezidis and get passports for a waiting list of hundreds of Yezidis. Follow her on her public FaceBook page.

Yezidis Bury Kocho Genocide Victims
Be the first to comment!
Leave a reply »