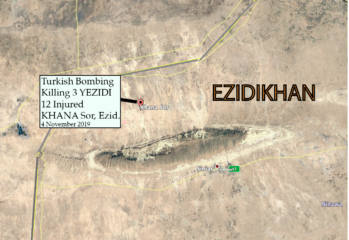 by Patrick Harriganon November 6, 2019
The Yezidi village of Bara was struck for the second time in two days on Tuesday evening, following another suspected Turkish airstrike in a nearby village the day before. Three people are believed to have been injured in the Tuesday offensive, according to Yezidi media outlet EzidiPress. No civilians were reported to have died.