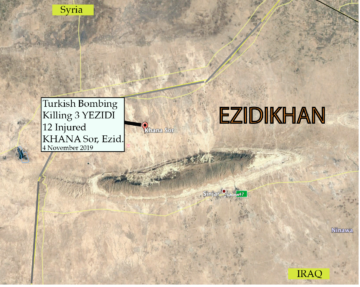 [Shingal, Ezidikhan, Iraq. 5 Nov 2019] The Yezidi village of Bara was struck for the second time in two days on Tuesday evening, following another suspected Turkish airstrike in a nearby village the day before.

Situated north of Mount Shingal, which sheltered thousands of Yezidis against the ISIS onslaught in 2014, the strike was said to be targeting Kurdish forces in the area.

Three people are believed to have been injured in the Tuesday offensive, according to Yezidi media outlet EzidiPress. No civilians were reported to have died.

The YBS is a Yezidi militia active in Shingal, believed to be affiliated with the Kurdistan Workers’ Party (PKK), an armed group fighting for greater Kurdish political and cultural rights in Turkey and designated a terrorist organization by Ankara.

The PKK has said that while it played a part in the establishment of the YBS, the units’ members are solely local Yezidis.

The YBS was established to protect the Yezidi community in Iraq in 2007, playing a crucial role in the fight against Islamic State (ISIS) after it exacted genocide on the ethno-religious minority in and around the Shingal region in 2014.

Dawood Saleh, a Yezidi genocide survivor and writer based in the US is from the village of Bara.

“My whole family worked for so many years until we were able to build a big house, a beautiful house in Bara village. When ISIS attacked on August 3, 2014, our house was bombed. I feel that Turkey is finishing what ISIS started. Every Yezidi feels that way,” Saleh told Rudaw English.

He also blasted Turkey’s premise of targeting Kurdish “terrorist” militias to conduct airstrikes in the area, calling it “irrelevant and unacceptable”.

“Yezidis have faced so many genocides at the hands of Turks throughout history,” he said, adding that the Yezidi term for genocide- ferman- was used in the Ottoman era to describe operations carried out by the Ottoman Empire, in which Yezidis faced severe persecution.

The continued dangers in the region have left the community hopeless, Salih said.

“We were expecting the world to stand with us, bring justice to the Yezidi people and help us to rebuild and return to our homeland. Instead we see that nothing is going to happen.”

Since liberation from ISIS in December 2015, Shingal has been controlled by a variety of armed groups, including the Iraqi army, Kurdish Peshmarga, the People’s Protection Units (YPG) and Iranian-backed Popular Mobilization Forces (Hashd al-Shaabi in Arabic). Yezidis have also set up their own militias, some of which are affiliated with larger groups.

Turkey justifies its strikes by claiming Mount Shingal is host to PKK positions. The area of Shingal, otherwise known as Sinjar, was subject to a spate of airstrikes in 2018, one of which killed prominent local PKK commander Zaki Shingali alongside four YBS fighters in an airstrike in August 2018.

Ankara has yet to confirm it conducted the strikes in Bara. However, the Turkish Defense Ministry yesterday confirmed it had bombed Haftanin, in the Qandil mountains of the Kurdistan Region. It said two PKK militants were killed in the strike.

“This is not an isolated incident,” she wrote.

“Turkey has repeatedly bombed the Sinjar region of Iraq- these acts of aggression pose immense danger to the population of Sinjar and deserve condemnation by the international community.”

She added that the future of her people is “increasingly uncertain,” and called on Iraq to integrate “all armed groups into the official security forces.”

Murad has previously spoken of the obstacles to rebuilding Shingal due to the presence of various armed forces in the region, including disputes between the federal Iraqi and regional Kurdish armies.

“Now there is no ISIS, but we cannot go back [to Shingal] because the Kurdish government and Iraqi government, they are fighting [over] who will control my area”, she told US President Donald Trump in July.

Patrick Harrigan trained in comparative religion and indology at the University of Michigan and UC-Berkeley as a Sri Lanka specialist and advocate of indigenous tribal peoples. Since September 2014 he has been serving as editor, publisher and policy consultant to the Yezidi Nation.
You might also like
Turkey

Turkish aircraft attack YBS headquarters; 20 dead or injured
Be the first to comment!
Leave a reply »