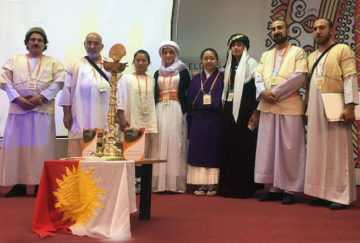 [Lalish, Ezidikhan 2 March 2018]  – Prime Minister Waheed Mandoo Hammo led a ministerial delegation for a diplomatic visit during the week of January 27–29 to the Government of India for meetings with External Affairs Sushma Swaraj. Prime Minister Hammo and Minister Swaraj conducted constructive talks concerning the economic, political and strategic needs of the Ezidikhan peoples. The delegation was seeking support from India as well for the establishment of a special International Criminal Tribunal for Yezidi and Neighboring Peoples in light of the August 2014 massacre of Yezidi and other peoples in Northern Iraq.

In a communiqué released on 10 February Prime Minister Hammo wrote to Swaraj, “My government and indeed my people are profoundly pleased to know of the support that non-profits in India will extend help to establish an International Criminal Tribunal for Yezidi and Neighboring Peoples. And, I must say the genuine commitments made by your government are most welcome to help rebuild Ezidikhan and support our program to organize the return of Ezidikhan people who were forced into refugee status internally and externally.”

These meetings are part of the Ezidikhan Rebuild and Return diplomatic initiative that has also led to talks with the Iraqi leadership and representatives of other governments. The Ezidikhan government is actively seeking engagements for financial and technical support to rebuild from further diplomatic contacts in Europe and Asia.

Patrick Harrigan trained in comparative religion and indology at the University of Michigan and UC-Berkeley as a Sri Lanka specialist and advocate of indigenous tribal peoples. Since September 2014 he has been serving as editor, publisher and policy consultant to the Yezidi Nation.
You might also like
IndiaUncategorized

Prime Minister leads Ezidikhan mission to New Delhi
Be the first to comment!
Leave a reply »