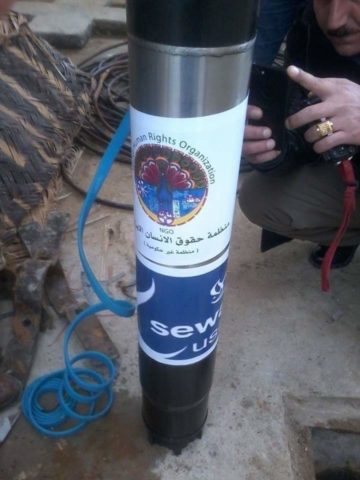 [Siba Sheikh Kadir, Shingal, Ezidikhan. 9 July 2019]. The Prime Minister of Ezidikhan, Barjis Soso Kalaf recently declared that “For the past few years, our Government has been working on the ground and listening to the needs of Yezidis on how to speed the return of our citizens to Ezidikhan. The biggest issue has been clean drinking water.”

Now the Government of Ezidikhan has begun to deliver results to its visionary pledge to ‘Return and Rebuild’ with a new water well system installed at Siba Sheikh Kadir collective on the south side of Shingal Mountain. With project funds provided by the Government of India to the Ezidikhan Government, the project broke ground in October 2018.

The newly finished water system was inaugurated in January 2019 and now serves all inhabitants of the sprawling Siba Sheikh Kadir collective.

In a statement, Prime Minister Barjis recently said, “This well system has been needed for the past four years. We are grateful to the Government of India and to Sewa International for providing the funds and technical help that was needed for this project. Installing this water well system is a first step in providing the basic human needs that will speed up the rebuilding process.”

As Ezidikhan Minister of Justice Nallein Sowilo explains, “We chose Siba Sheikh Kadir for this first water well system because is an area of great cultural diversity with Roma, Mandean, Shebek, Assyrian, and Zoroastrian families as well as Yezidis. This is another sign of the Ezidikhan Government’s firm commitment to provide material relief to all its communities.”

“In July 2018 after Yezidi displacement camps Ezidikhan government opened talks with the Government of India concerning this and other development projects. Since 2014 when Shingal mountain water wells were either destroyed or poisoned by Daesh, the farmers and remaining residents have had no source of fresh water. Because of this, our farmers suffered one of the biggest losses in production in recent memory.

“This system will provide fresh water to all citizens. It is the first step in resuming agriculture production around Siba Sheikh Kadir. The Yezidis living in refugee camp will be also provided with fresh water.”

“Since 2014, most villages in Shingal have been without clean drinking water due to ISIS poisoning our wells and destroying entire village water well systems. This was a long term project that the Ezidikhan Government has been working to get funded for the past three years. At last, with help from the Government of India and from Sewa International we were able to get funds needed to complete this project,” says Nallein Sowilo, Ezidikhan Minister of Justice.

Inhabited by Arabs, Kurds, Assyrians, Yazidis, and Shabaks for centuries, the governorate of Ninewa is a cultural mosaic. The plethora of ancient temples, churches, and mosques which dot the plains surrounding Mosul and the mountain areas of Sinjar attest the province’s rich ethnic and religious diversity.

Agriculture is a key component of Ninewa’s economy, particularly in the production of cereal, as well as sugar cane, sunflowers, vegetables and herbs. Ninewa ranks among some of the poorest governorates in Iraq. Food insecurity grew significantly in the last decade due to prolonged drought. In 2011, 26% of the population lived below the poverty line of US$ 2.50 per day.

The proportion of the population with sustainable access to an improved water source is 80%, while only 67% of the population is connected to the public water network, which is the lowest percentage in the country. Ratios of water connection are particularly poor in Tel Afar, Sinjar, Al-Ba’aj and Hatra districts.

Most collective towns are without proper sewage. The greatest drawback is the lack of adequate supplies of potable water, which has to be delivered by truck. Recent years have seen no improvement in the infrastructure.

The Yezidi religious minority notoriously suffered – and is still suffering – innumerable atrocities deliberately targeting their community. An estimated 250,000 Yazidis were forced to abandon their homes to flee to Mount Sinjar and seek subsequent refuge in the nearby Kurdistan region of Iraq or leave the country. More than half (133,000) are from the north sub-district alone. Meanwhile, unoccupied Yazidi settlements were either demolished or seized by ISIL fighters and allocated to its supporters. Some 3,000 homes are thought to have been destroyed in the district of Sinjar and the liberated collective townships to the north of Mount Sinjar. Several thousand houses have been burned. Most displaced Yazidis are living today in camps scattered on the outskirts of cities and towns of Kurdistan.

Patrick Harrigan trained in comparative religion and indology at the University of Michigan and UC-Berkeley as a Sri Lanka specialist and advocate of indigenous tribal peoples. Since September 2014 he has been serving as editor, publisher and policy consultant to the Yezidi Nation.
You might also like
Uncategorized